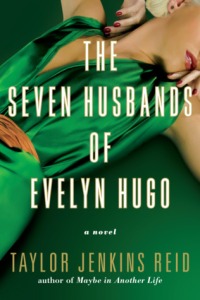 One cannot argue that Taylor Jenkins Reid’s Seven Husbands of Evelyn Hugo is a page turner. But does it go beyond that?

Evelyn Hugo: a home wrecker, bomb shell, an extra ordinary woman.  Coming from a slum in Cuba, from nowhere, with no one supporting her, still managed to get on top of the mountain of fame in Hollywood.

She’s now old but still beautiful and elegant, her wild years long gone. She decides to tell the world all about her life, the seven husbands, all the troubles and why’s – and she picks a no-name journalist for this to-kill-for task. Honestly, why does Evelyn Hugo picks an unknown journalist to get her life story out? The world is hungry to know and the reader will be as well!

I must say the first few chapters of this book were fast and addictive, but after one point I started to think, does Evelyn really need 7 husbands to get the book set up? Reading about Husband 1 and 2 were gripping, but somewhere after the 4th one I started to get a bit bored. Some messages in the book were sharp and effective, but some were so in your face and repetitive. Don’t get me wrong, I liked this, but I am a picky reader and can’t stop thinking that the bond between Harry and Evelyn was a bit “because it had to be so”. How their relationship evolved and developed wasn’t very detailed, so as most of the characters except Evelyn. She is hot-tempered, head strong, determined but the other people in this book are not as strong and well developed. Maybe it’s this Historical/romance genre I am not a fan of, but there are a lot of 5 stars for this book and I was just thinking it could have been better.

I would definitely read from Jenkins Reid again, and would love to watch this one on the screen. It will make a good TV series!