Everyone against themselves, Us Against You. 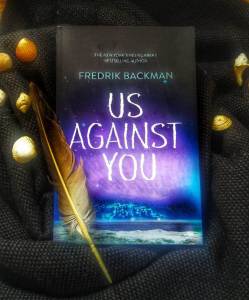 Beartown, also published as the Scandal, is one of the best books I’ve read this year and I  was thrilled to get a proof copy early on for the sequel, Us Against You. (Click here for BearTown review. )Backman’s writing and style is unique and faultless, our characters are where we left them and the story is very easy to pick up from where Beartown has left.

For those who haven’t read him before, his style is very cinematographic. He moves the reader from place to place, character to character as if directing a camera.

There are new characters, more politics, more darkness and surprisingly less hockey in Us Against You but it’s still a joy to read if you loved Beartown. Backman reminds me of Elizabeth Strout a lot, both writer’s works focus on ordinary people and analyses what they go through.

There is a lot that’s served in Backman’s small town story, from rape to marital problems, alcoholism, loneliness, hopelessness, determination, getting damage and healing, accepting, growing up, bullying, violence, love, anxiety… The book is also full of bits you’d like to underline, Backman is such a master when it comes to quotes!

I am not going to dive into what happens to Beartown folk, but one criticism to this book will be the repeating of some things in Beartown. I can’t imagine one will read this book without reading Beartown as it’s a sequel and won’t make any sense before the build up of the town/characters  in first book. So I think some bits were unnecessarily repetitive, such as Maya and Ana’s friendship. No need to explain how close they are, how they found each other, etc.

I will leave you with an excerpt from this wonderful book.

Violence is the easiest and the hardest thing in the world to understand. Some of us are prepared to use it to get power, others only in self-defense, some all the time, others not at all. But then there’s another type, unlike all the others, who seems to fight entirely without purpose.
Ask anyone who has looked into a pair of those eyes when they turn dark, and you’ll realize that we belong to different species. No one can really know if those people lack something that other people possess or if it’s the other way around. If something goes out inside them when they clench their fists or if something switches on. Almost all fights are won or lost long before they start; the brain needs to be working, the heart needs to be pounding before your hands can do the same. And you will be scared— if not just of being hit, then of being vanquished; if not of being injured, then of injuring someone else. That’s why adrenaline appears, the body’s biological defense: claws out, horns lowered, hooves raised, canine teeth bared. The first blow? That doesn’t decide anything, doesn’t say anything about you. The rest, on the other hand, reveal everything.