5 writers that desperately need to be translated to English NOW

Oh dear me. Grunberg is one of the BEST dark and satirical writers I have ever read and yet no one seems to have read him. Why? Because he is not available in English! His novel Tirza was an extremely successful portrayal of a middle aged man with obsessions- a brave criticism to the racist, homophobic, sexist but on the surface do-gooder and law abiding citizen of western world. I don’t think he is yet translated to English, as I can’t seem to find his other novel’s English titles. Read 3 of his work so far and all of them are exceptional! I am a big admirer of Grunberg and his work needs to be translated! If you love ironic, satirical books with solid plot lines then he is a must read.

If you ask me to describe Anar’s work shortly, I would say: Magical Realism meets with 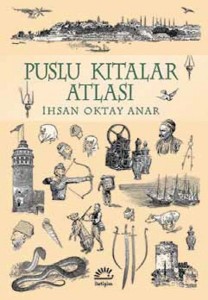 Ottoman orientalism. His vivid descriptions of the historic Istanbul and Anatolia, and the people of Ottoman is simply magnificent.  The breathtakingly beautiful Puslu Kitalar Atlasi needs to get translated!

If you google The Atlas of Misty Continents, it pulls some results but unfortunately although having been translated to German and French this novel is sadly still not available in English. What a shame!

Being a professor of Philosophy, Anar blends history, culture and philosophy in his books and creates magical atmospheres, he holds your hand and guides you through the streets of Ottoman Istanbul- or it’s then name, Konstantiniye. He has several novels and also short stories. Attention to publishers 🙂

I have read Dimov’s Tutun (Tobacco) when I was in my early twenties and I was taken away by the strength of his characters, and the richness of the plot. Tobacco is made into a movie so it’s surprising to see it’s still haven’t been translated. Especially the historical accuracy of the events taking place in the novel is shocking.

Dimov’s writing is full of subtext, he judges the society and makes a lot of effort to lay out how working class is being exploited… An eye opening, historic and psychological novel. Another must read!

made it to Waterstones. If you like Historical mystery novels, she is the address to go.

Unfortunately, only two books of her is translated to Turkish, where I read her originally and both were very good. So please dear publishers, could you be kind enough to translate her?

Her novels are set mostly in Italy and have ambitious and brave female heroines. Her Italian heroine Cecilia Barghini is surely one of the most feminist females of historical fiction! Go Cecilia. I am sure you’ll meet with English readers, one day.

Her books are set in Bavaria, in an imaginary small town very near Landshut. Her protagonist Franz Eberhofer is a bit cliche but too funny! He always puts himself into awkward situations, has a very unique grand mother and an unlikeable brother. He also has a crazy on and off romance with a colleague and a desire to catch  the killers as well as filling his tummy.

I have visited Bavaria just because my love of this book. I am going again soon and this time will visit Landshut too! If you like cosy murder-mystery books with a touch of humour, this book is perfect fit for you. The book series have names of food, who doesn’t like German food by the way? Hmm…. Time to send emails full of demands, to publishers, I think!

What do you think ? Would you be interested in reading these writers? Or are there any books you’ve read in another language and wished that was translated to English? Please comment below to share your opinions!