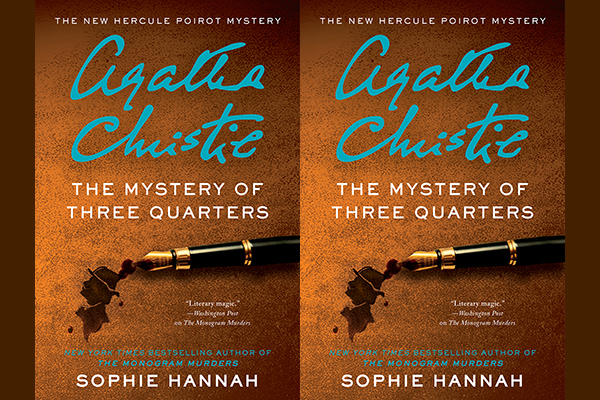 I am SO looking forward to read Sophie Hannah’s new Poirot mystery, which will be published in August and revealed it’s cover earlier this month.

I’ve seen this beautifully vintage and Christie-like cover a few weeks ago.( was just being lazy to write this post) My initial reaction for this cover was: It looks so much like a Poirot novel! I still think it does. I love the leaking pen and all the colours and graphics work together beautifully. This is something you would want to pick up in a book shop!

What do we know about the novel so far:

Sophie Hannah is super kind and tries her best to reply to her fans over twitter. Here is a reply that she gave me end of last year. So we know that this book takes place in London, a boarding school (anyone else getting Cat amongst pigeons vibe!!) and one of Christie’s most beloved settings, large country house.

Publisher (Harper Collins) defines the book as a diabolically clever mystery. Here is the blurb:

Hercule Poirot returns home after an agreeable luncheon to find an angry woman waiting to berate him outside his front door. Her name is Sylvia Rule, and she demands to know why Poirot has accused her of the murder of Barnabas Pandy, a man she has neither heard of nor ever met. She is furious to be so accused, and deeply shocked. Poirot is equally shocked, because he too has never heard of any Barnabas Pandy, and he certainly did not send the letter in question. He cannot convince Sylvia Rule of his innocence, however, and she marches away in a rage.

Shaken, Poirot goes inside, only to find that he has a visitor waiting for him — a man called John McCrodden who also claims also to have received a letter from Poirot that morning, accusing him of the murder of Barnabas Pandy…

Poirot wonders how many more letters of this sort have been sent in his name. Who sent them, and why? More importantly, who is Barnabas Pandy, is he dead, and, if so, was he murdered? And can Poirot find out the answers without putting more lives in danger?

I can’t wait to read this book! Thanks Sophie Hannah to continue writing Poirot. Isn’t he the best?